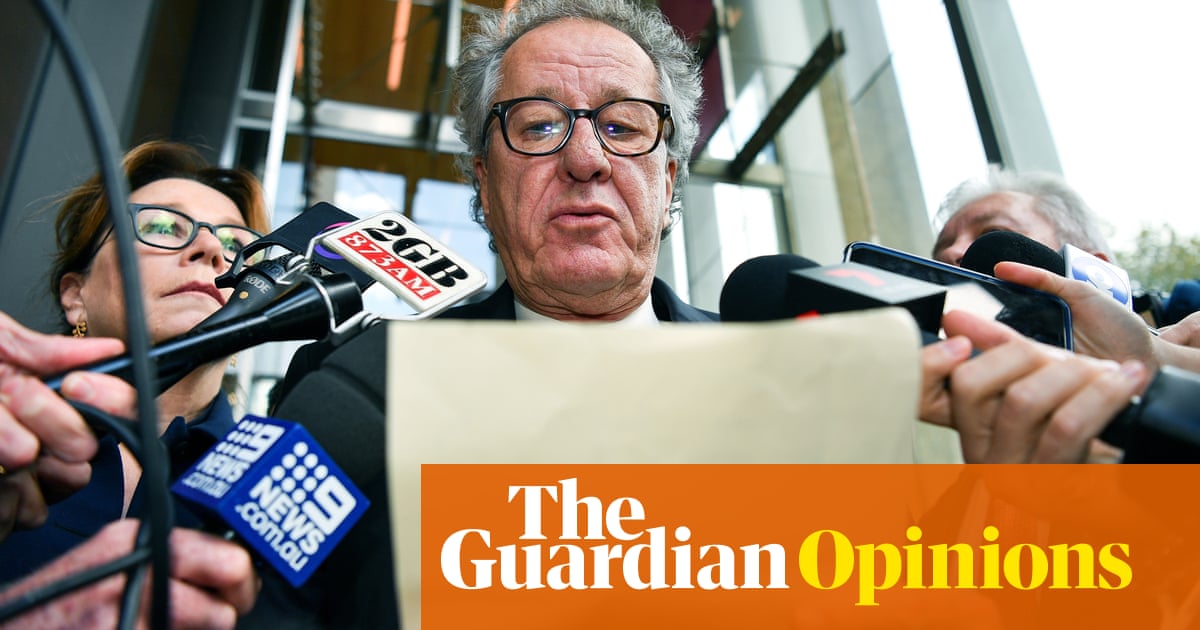 Geoffrey Rush greeted his vindication with a look of anguish. His demeanor outside the Federal Court last week was decidedly grim. So too, his wife Jane Menelaus.

If an $850,000 award of damages, with the promise of lots more to come, isn’t going to put a spring in your step, what sort of vindication is this?

Rush said: “There are no winners in this case, it has been extremely distressing for everyone involved.”

The main defence witness Eryn Jean Norvill agreed: “There are no winners, only losers.”

Justice Michael Wigney had the same sentiment: “This is a sad and unfortunate case.”

Of course, there are winners. The lawyers are the winners and on the Rush team that’s where you find the triumph – so much so that the applicant’s barrister Bruce McClintock started to give the media a little lecture about its responsibility.

This from a barrister who had a steady trade defending Channel Nine’s stories and acting for Eddie Obeid.

The aim of the verdict with its substantial dollar amounts is to vindicate the damaged party, salve his hurt feelings and restore his reputation. Yet it does none of those things satisfactorily.

Google has made the damage global. The story, in some form or other, is always there, just as is Norvill’s statement outside the court where she said:

“I stand by everything I said at trial. I told the truth. I know what happened. I was there.”

The future for Rush and Norvill is uncertain. It is to be hoped they can work again but it would be understandable if there was a lot of unhappiness and doubt to overcome before that is possible.

The subject of an attack such as this in a raffish fish-wrapper of a newspaper doesn’t have many options in how best to respond. Suing in defamation invariably is the primal instinct, particularly for a well-lined and prominent person such as Rush.

It only takes a few months before it becomes apparent that they have entered a nightmare world of pleadings, interrogatories, lawyers, cross-claims, hearings, interlocutory judgments, delays, appeals – all with the meter ticking.

Defamation is a blunt instrument and a far from ideal way to square the ledger. Justice Wigney agrees:

“It plainly would have been better for all concerned if the issues that arose in the saga that played out in this courtroom in October and November last year had been allowed to be dealt with in a different way and in a different place to the harsh adversarial world of a defamation proceeding.”

Frequently, lawyers acting for applicants win defamation cases by wholesale attacks on the media source. In the context of the #MeToo environment, invariably that means women are marched into the witness box to have their lives meticulously julienned.

We saw it in the Chris Gayle case against Fairfax and again in Rush, where the court heard evidence – that was ultimately rejected – that among other things, Rush had made groping gestures during rehearsal while Norvill was lying “dead” on the floor; make jokes about her with sexual innuendoes; licked his lips while looking at her; used his hands in groping gestures; touched her breast in the final scene of King Lear; moved his hand under her shirt and brushed her skin across her lower back; and sent the infamous text message “thinking of you more than is socially appropriate” accompanied by an emoji with a protruding tongue.

All of this was denied by Rush and by his theatre witnesses, director Neil Armfield and actors Robyn Nevin and Helen Buday. Mark Winter was the only witness who supported aspects of Norvill’s evidence.

In every instance, the judge preferred the applicant’s evidence. Armfield didn’t see any of the inappropriate behaviour, nor did Buday; some of the allegations were not put to Winter; things Norvill said in evidence were not in her original prepared statement; and she sent Rush friendly greetings and text messages even after he had allegedly behaved “inappropriately” towards her.

The judgment does not adequately explore why this may have been so. There was no explicit judicial recognition of the close friendship between Rush’s main theatre witnesses, an aspect that should have been considered and carefully weighed.

Free press backwater: how to change the defamation laws that stifle Australian journalism

It is also entirely possible that new things are remembered by a witness after a formal statement has been prepared, and that even though Norvill had an unhappy time during the King Lear production she still wanted to keep a good relationship with a significant star like Rush. None of that was sufficiently explored in the judgment.

The judge also dismissed Norvill’s belief that people in the Sydney Theatre Company’s production of King Lear production were “complicit” in turning a blind eye to Rush’s behaviour. He equated this claim to saying that Nevin, Armfield and Buday were all lying and he rejected out of hand the possibility that “generational difference” played a part in the general acceptance of Rush’s alleged antics.

Wigney gave Rush’s colleagues a gold-plated endorsement: “… each of them was a highly-qualified, experienced, accomplished and well-respected, if not revered, figure in theatre circles. No question was raised about their character or integrity. Nor could it have been.”

Norvill gave evidence that on the day the 1 December article in the Telegraph appeared she had a conversation with Nevin in which she said Rush had harassed her. She told the court that Nevin’s response was, “I didn’t think Geoffrey was doing that anymore”.

Wigney did not accept that Norvill had taken her concerns to Nevin.

He rejected the accusation that Rush consciously stroked her right breast: “How could Mr Rush maintain the focus and state of mind which he considered necessary to properly perform this difficult scene, and yet engage in such a base and crude action as intentionally stroking Ms Norvill’s breast?”

As for the “socially inappropriate thoughts” with the panting emoji this too went nowhere. While many might regard this as suggestive of an older man salivating at the thought of a younger woman, Justice Wigney arrived at an entirely different conclusion – it was a throwaway line, a joke and it simply meant the actor was sorry for missing the opening night of a play in which Norvill was performing.

It was not believable that Rush was “putting it out there”.

The newspaper’s truth defence was out the window. This was more about the reluctant Norvill than it was about the Telegraph’s folly. The respondents put it that there was no motive for Ms Norvill to come to court and lie. Why would she make up a whole pile of unpleasant allegations just for the privilege of being torn apart in the witness box for a few days, and thereby putting her career on the line?

There’s another yawning vacant space that hovers over Wigney’s reasons. Seven days into the trial Nationwide News applied to amend its truth defence, saying it had a new witness.

Rush’s lawyers succeeded in getting a suppression order over the publication of the identity of that witness as well as the contents of the new information.

Apparently, the newspaper knew about this person for some time but had been unsuccessful in persuading her to give evidence. It was not until 26 October last year that a solicitor for the mystery person got in touch with Nationwide News’ lawyers and said she is now willing to give evidence.

Accompanying the application was a statement from the potential witness referring to a number of incidents during a time “Witness X” worked alongside Rush.

In his reasons for rejecting the application to bring forward this new evidence, Wigney said: “The incidents could broadly be said to be sexual in nature.”

#MeToo has led to an asphyxiating vortex of litigation | Richard Ackland

At that point he was uncertain whether the evidence would also support the imputation that Rush was a “pervert”, but possibly it could.

Even if all this was not sufficient to win the case for the newspaper publisher it would bear on the mitigation of damages, “perhaps significantly”.

Unfortunately, the witness was not available to attend the trial until the end of February, although she could have appeared by video link. In the end, Wigney refused to admit this evidence and the suppression order is still in place. To do so, he thought, would delay the trial and prejudice Rush. He had another trial starting in March, which meant the Rush proceedings could not resume until April. He wanted it to proceed forthwith.

As it happened, the dates for the March trial were subsequently vacated, so he could have heard from Witness X that month without unduly delaying his reasons beyond the date they were handed down on April 11.

When his verdict came down Nine Newspapers applied to have the suppression order lifted, but Justice Wigney said he would not consider that until 10 May.

So here we are. Defamation contests invite a contorted and artificial landscape where alleged victims can become victims all over again, where lives are irrevocably damaged and where frequently the truth goes missing in action. At least the lawyers are happy.